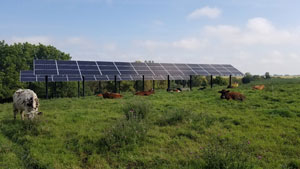 The agricultural industry consumes an immense amount of fossil-fuel in the production of food, feed, fiber, and energy. From the electricity that cools milk, to the fuel that is burned in combines and tractors in grain fields, to the trucks that bring goods to market, and to the nitrogen fertilizer that nourishes plants; the agricultural industry is captive to large and constant supplies of a wide range of fossil energy. Agriculture’s dependence and thirst for fossil-fuel carries significant economic, environmental, and social risks for the nation and world. Agrivoltaics is one way producers might be able to become less dependent on fossil fuels, lower production costs, increase land efficiency, improve forages and crops for use by dairy cattle, and increase milk production and health in dairy cows. Using a ground-mounted PV system in a dairy setting could provide shade to dairy cows during extreme heat events and provide farmers with an alternative means of income.

Through past investments and institutional experience in renewable energy and dairy production research, the University of Minnesota West Central Research and Outreach Center (WCROC) has a globally unique opportunity to lead a new green revolution - a revolution that greens energy currently consumed within the agricultural industry. The Morris dairy operation milks 275 cows twice daily and is representative of a mid-size Minnesota dairy farm. The cows are split almost evenly between a conventional and a certified organic grazing herd.

There is no research that has investigated the use of a ground-mounted solar system to provide shade for dairy cows and to determine the effects on dairy cows. Therefore, our team wanted to investigate the effects of shade from solar photovoltaic panels on the production, health, and behavior of pastured dairy cows. During the summer of 2018, a 30 kilowatt ground mounted solar system was installed in a pasture at the WCROC. The panels were mounted at 35˚ south and 8 to 10 feet from the ground so that cows could not reach the panels. The solar panels were Heliene panels (Heliene Photovoltaic Modules, Marie, Ontario and Minneapolis, MN) using Solar Edge (Solar Edge, Fremont, CA) inverters and optimizers and were installed by Zenergy (Zenergy, Sebeka, MN). The cost increase for mounting the panels above the cows was minimal and the total cost was about $90,000.

The pastured dairy cow study was conducted from June 2019 through September 2019. Twenty-four crossbred cows were assigned to one of two treatments: shade from solar PV or no shade. The no shade cows did not have access to any shade on pasture. All cows had a CowManager ear-tag sensor to record ruminating, eating, not active, and active behaviors for all cows. Also, a SmaXtec bolus was placed in the reticulum of the cow and recorded internal body temperature, as well as activity and drinking bouts of cows. Daytime ambient high temperatures during the study ranged from 81 to 93℉. 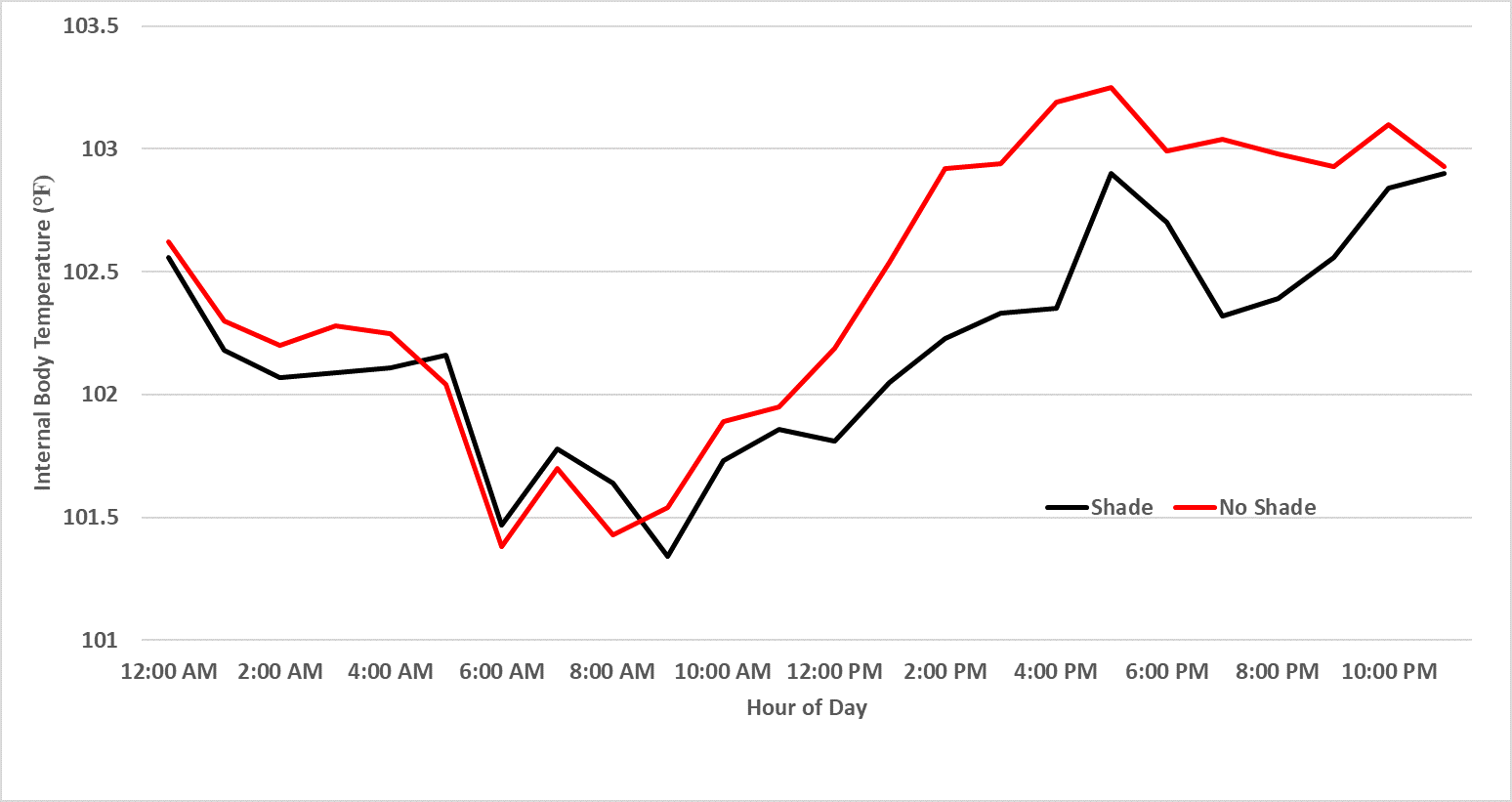 Based on the results of this study, cows may have sacrificed grazing time to stand in the protection of the shade. Future research with our solar panel will investigate the reproductive performance of the cows, and long term effects on milk, fat, and protein production, body weight, body condition, and animal health and well-being. Our study indicates that agrivoltaics may provide an acceptable method of heat abatement to pastured dairy cows, as well as generating electrical energy for farmers, thus reducing the carbon footprint of the dairy operation. In the future, we will be exploring tracking systems for solar in livestock farms, using solar panels as windbreaks for cattle, and evaluating crops and forages that will grow best under solar systems. Economic impacts of the agrivoltaic system and land productivity from solar farms will drive the adoption of solar photovoltaic systems on farm.