By Brad Heins, Associate Professor of Dairy Science, and Hannah Phillips, U of MN Graduate Student

It is well established that winter cover crops, when used in rotation with other crops, improve soil health. Cover crops are commonly used as a “green manure” or harvested for grain and straw; however, they could potentially be grazed with livestock in the early spring and summer. In addition, grazing is a low-input method to feed livestock which could improve soil health by adding fresh manure to the field or pastures. Farmers who want to improve soil health and utilize a low-input grazing system may benefit from integrating crops and livestock in their system. Integrating crops and livestock on a multi-function operation could have multiple benefits and the potential to improve the profitability of these kinds of operations.

Researchers at Iowa State University, the University of Minnesota, and Rodale Institute are in the third year of a four-year project, funded by the USDA Organic Research and Extension Initiative, to evaluate the production, environmental, and economic benefits of growing cash crops with forage crops for grazing, including small grains and hay crops for livestock feed. They are comparing two crop rotations—pasture-winter wheat-soybean-pasture and pasture-winter rye/hairy vetch-corn-pasture—and grazing dairy steers on the cover crops as a method of integrating livestock and organic cropping systems.

At the University of Minnesota West Central Research and Outreach Center’s organic dairy in Morris, Minn., the dairy bull calves are: Holsteins; crossbreds comprised of Holstein (HOL), Montbéliarde, and Viking Red (MVH); and crossbreds comprised of Normande, Jersey, and Viking Red (NJV). Researchers there are grazing steers on a pasture divided in half for the two crop sequences (S1: Pasture-wheat-soybean, and S2: Pasture-rye/vetch-corn). These pastures are separated into 15 paddocks, with a non-grazed enclosure in each paddock. Winter wheat (WW) and winter rye (WR) forages were planted on Sept. 11, 2015, for grazing during spring 2016. During this spring, calves were randomly assigned to replicated groups (winter wheat or winter rye), but balanced by breed group to reduce potential breed bias. Twelve-month old dairy steers started grazing the wheat and rye pastures on April 25, 2016. Forage samples were collected when steers moved to new paddocks which was about every three days.

Winter rye (2,626 lbs DM/acre) had greater herbage mass compared to winter wheat (2,021 lbs DM/acre). Crude protein was very high in both the winter wheat and winter rye across the grazing season, which lasted until June 14, 2016 for these grasses. From early May through the end of the grazing season, the crude protein was lower than at the start of grazing; however, the steers were probably more efficient at utilizing the protein when it was lower compared to high protein levels observed during late April. Digestibility (see figure) of the winter wheat and rye also was very high. As the wheat and rye matured, the digestibility was lower; however, the dairy steers grazed each paddock and wheat and rye four times in a two-month period. 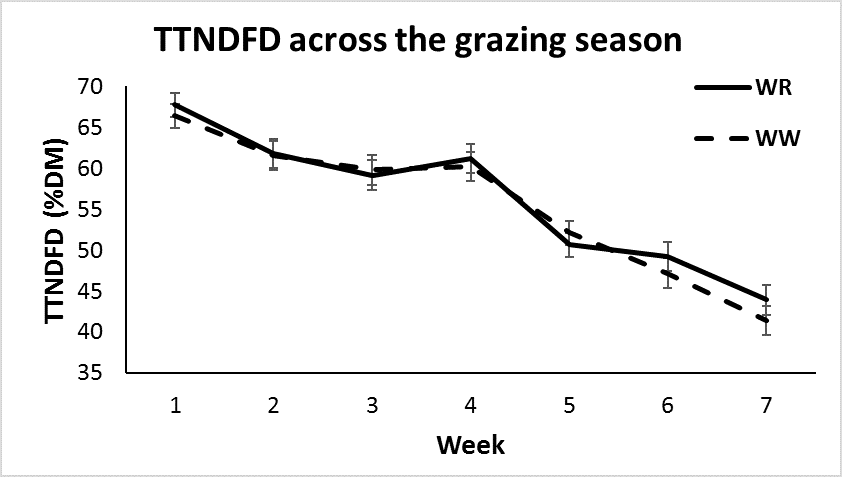 For cover crop differences, beef from steers grazing WW had higher flavor, texture, juiciness, and overall liking, and lower toughness and off-flavor compared to beef from steers grazing WR. For breeds, the NJV steaks had a higher texture liking and lower toughness compared to steaks from both MVH and HOL. Furthermore, NJV and MVH steaks had higher juiciness than HOL steaks. The NJV steaks had a higher overall and flavor liking than HOL steaks.

The omega-6 and 3 FA’s were not different between steers that grazed WW compared to WR. From this study, cover crops did not influence omega-6 or 3 FA concentration in the fat of beef. The omega-3 FA concentration was higher in fat from MVH steers compared to HOL fat. The omega-6/3 ratio was higher in HOL back fat compared to NJV and MVH back fat. Although these steers were finished on a forage diet, they received grain during the pre and post weaning stages. This may have influenced the higher omega-6/3 ratio in this study than steers fed a no-grain diet throughout their lifetime.

In this study, the wheat and rye cover crops were ready to graze 3 weeks earlier than other perennial pastures on the farm. This study not only applies to grazing steers, but to grazing dairy cows as well. By grazing cover crops, we were able to start grazing 3 weeks earlier in the grazing season and graze the system 3 times through with about 16 days of rest between grazing periods. Grazing winter wheat and winter rye are both feasible to graze in the early spring and summer.

The integration of livestock in organic cropping systems is a prerequisite for long-term agricultural stability. We are studying methods to integrate crops and livestock to determine this model’s effect on animal performance, crop productivity (including small grains for grazing), soil quality, food safety and social acceptance. During the third year of the project, organic row crops will be harvested, and crop/livestock budgets will be produced.