Three-Breed Crossbreeding at the U of MN - An Update

Crossbreeding of dairy cattle is a topic of growing interest around the world because of dairy producer concerns regarding calf survival, cow fertility, and cow health of Holstein cattle. Over the past decade, Jersey was often the first breed of choice for crossbreeding with the Holstein breed in the United States because the Jersey breed has the second largest number of cows among the pure breeds in the United States. Recent crossbreeding research has focused on the performance and profitability of Jersey, Brown Swiss, Normande, Montbéliarde, and Viking Red sires mated to Holstein cattle However, dairy producers must decide how to mate the 2-breed crossbred, and some have chosen to backcross to one of the parent breeds. Others have chosen to implement a 3-breed rotational crossbreeding system. The use of 3 breeds maintains higher average levels of heterosis across generations than a 2-breed crossbreeding system. Few studies have evaluated performance of the 3-breed and third generation Holstein-sired crossbred cows under various management systems.& We wanted to determine differences between 3-breed crossbreds, third generation Holstein-sired crossbreds (5/8 Holstein), and pure Holstein cows for fertility, production, and SCS during their first three lactations in a seasonal-pasture production system. 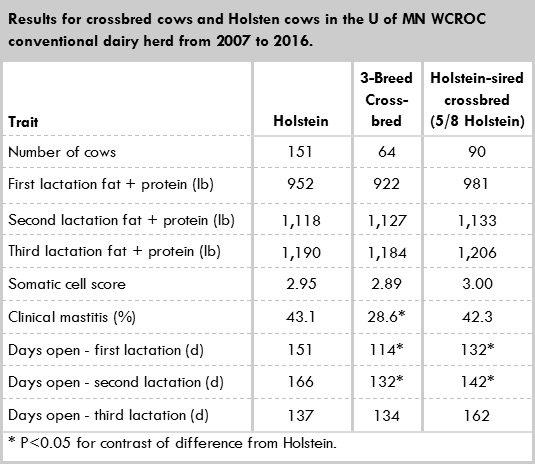 Reproductive performance has been overlooked by many when comparing purebreds and crossbreds. For this study, crossbred cows had fewer days open and similar fat plus protein production compared with pure HO cows, and these advantages for crossbreds should have substantial impact on profitability of dairying. In this seasonal-pasture herd, Holstein-sired crossbred offspring from a 3-breed crossbred dam had similar production and superior fertility compared to pure HO cows. Therefore, mating 3-breed crossbreds to Holstein bulls may have advantages in a rotational crossbreeding system. Three distinct breeds are likely optimum for a rotational crossbreeding system.