Management and Genetics of Lameness in Holstein and Jersey Cows

Improvements in animal welfare are a priority for animal agriculture and can benefit both animals and producers. There is a growing concern for the well-being of animals in response to the demand of consumers for welfare-certified products. Lameness is a major animal welfare and economic issue for the dairy industry and is a challenge to overcome due to lameness being caused by many factors. Lameness challenges the sustainability of dairy production systems due to the pain and ensuing animal welfare issues, along with significant economic losses. Digital cushion thickness is a strong predictor of lameness and is associated with sole ulcers and white line disease.

In a recently completed study, we collected lameness information and digital cushion thickness from seven commercial dairy farms (5 Holstein farms and 2 Jersey farms) and one bull facility (Holstein and Jersey) in New York, USA. The study included 698 cows and 85 bulls (Holstein and Jersey), and hooves of animals were evaluated with ultrasound images of the digital cushion at the sole ulcer site. The objectives of our study were to examine the influences of management and environment on digital cushion thickness and identify genetic markers with lameness. 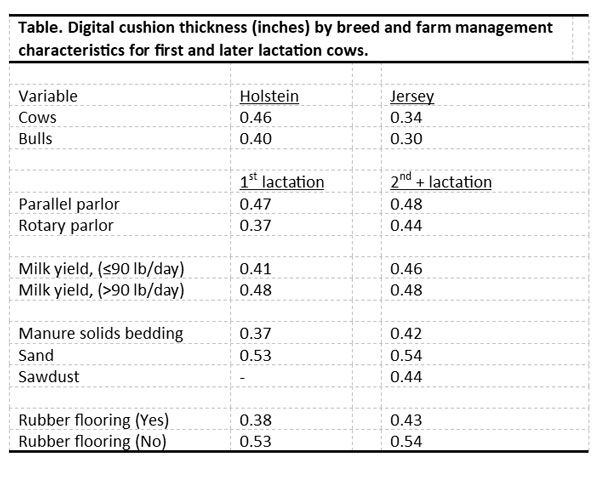 These results my help identify animals with higher odds of developing these diseases by highlighting key management factors and specific digits of hooves of importance for monitoring. This could allow producers to monitor those cows more closely and adjust management practices such that lameness is prevented or detected early enough to alleviate pain, improve resolution of lameness, avoid possible major changes to the hoof structures, and prevent negative effects like decreased productivity.

Results also indicate that lameness is a complex variable influenced by genetic and environmental factors. Genetic markers associated with digital cushion thickness change depending on breed, hoof digit, and foot. It is important to note that genomes of dairy cattle are not fully understood. There could be genes in genomic regions from this study influencing variation in lameness that are not characterized. The genetic markers discovered in this study have the opportunity to be used in breeding programs utilizing genomic selection to select against claw horn disruption lesions and lameness.