Pasture-based dairy production systems are becoming more common in the global dairy industry (USDA, 2016), and grazing dairy producers may benefit from utilizing precision dairy technologies. However, the majority of work conducted with precision technologies has been in confinement systems. In a grazing herd, a halter with a noseband pressure sensor accurately recorded grazing behavior of cows (Werner et al., 2018). Grazing behavior may be difficult to define because grazing may be considered as both active and eating behaviors because cows may graze while standing or while walking. The objectives of this study were to develop a grazing algorithm for an ear attached accelerometer (Smartbow GmbH, Weibern, Austria) and to validate the ear attached accelerometer for grazing behavior.

To validate the ear attached accelerometers grazing algorithm, a halter and noseband pressure sensor system (Rumiwatch, Itin and Hoch GmbH, Liestal, Switzerland) was utilized. The halter was comprised of a 3 axis accelerometer which recorded acceleration patterns and a noseband pressure sensor which detected jaw movements according to chewing activities (Werner et al., 2018). During September of 2018, data were collected from the ear-tag and halter system in Minnesota and Ireland.

In Minnesota, the ear attached accelerometers and the halter systems were attached to 12 crossbred cows for 4 days for each cow. Cows were offered pasture for 22 hours per day. Cows were milked twice per day in a swing-9 parabone milking parlor. The pastures were comprised of grasses and legumes that included smooth bromegrass, orchardgrass, meadow fescue, alfalfa, red clover, and kura clover. Cows were stocked at a rate of 3 cows per hectare and were rotated to new paddocks every 2 days, with 3,796 kg of DM/ha available at the start of grazing. 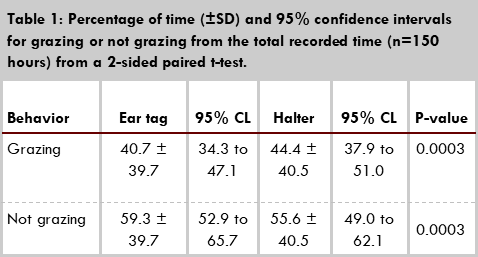