Quests for profitability and increased public interest in farm animal welfare have fostered a need to investigate winter housing options for low-input dairy herds. Housing options in Minnesota, which has cold winters, include tie-stall barns, free-stall barns, compost barns, and “out-wintering” on bedded packs with wind shelters. We have long known that beef cows and older dairy heifers can thrive with minimal shelter during Minnesota winters. In contrast, milk cows have generally been kept indoors, in part because they were milked in tie-stall barns. More recently, curtain-sided free stall barns or cross ventilated barns have become the standard housing of new construction for larger herds.

Out-wintering continues to increase in popularity, and our stakeholders identified the economics of housing systems as an important research topic. In particular, they asked if out-wintered dairy cattle will stay healthy and comfortable. If so, out-wintering could reduce winter housing costs.

We recently published a study that will develop practical strategies for organic dairy producers to enhance the profitability of their farm by evaluating two winter housing systems and their effects on economics of dairy cows. Dairy cows at the University of Minnesota’s West Central Research and Outreach Center, Morris, MN, that calved during fall and spring calving seasons were used to evaluate production, somatic cell score, dry matter intake, profitability, and behavior of dairy cattle housed outdoors on a straw pack or indoors in a compost bedded pack barn.

During the three years of the study, 268 lactating Holstein and crossbred dairy cattle were assigned to a winter housing system (straw pack or compost-bedded pack barn). Wheat straw was used as bedding for the outdoor straw packs, which were 40 feet wide by 80 feet long, and maintained to keep cows dry and absorb manure throughout the winter. The open-front compost-bedded pack barn (2 pens in the barn) was bedded with sawdust, and the bedding material was stirred twice per day with a small chisel plow. Cows were fed a TMR that included corn silage, alfalfa silage, corn, expelled soybean meal, vitamins and minerals. 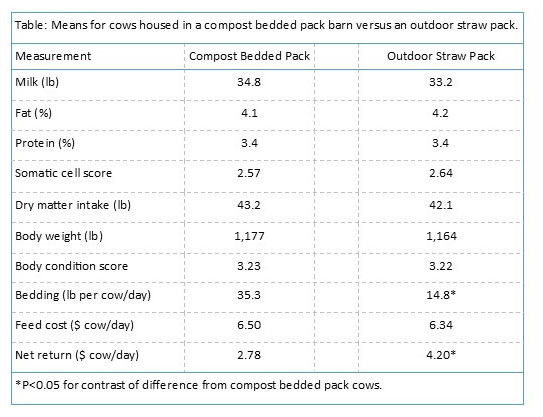 The straw pack cows had similar milk, fat, and protein production than the compost bedded pack cows (see accompanying table). Surprisingly, there were no differences in production between the two winter housing groups of organic cows for milk production or somatic cell score. The groups of cows also had similar dry matter intake, indicating that the cows that were housed on straw packs did not require more feed than cows housed in the compost bedded pack barn.

Across the winter seasons, there were no differences for body weight or body condition score for dairy cows. For animal cleanliness, the cows housed on straw packs had udders that were cleaner than cows housed in compost bedded packs (udder hygiene score of 1.45 versus 1.73).

Milk revenue and feed cost were not different for the housing systems. Labor and bedding costs were lower and net return was higher for the outwintering system. The outdoor straw pack had a $1.42/cow/day net return advantage over the compost bedded pack barn. The $1.42/cow/day net return advantage for the outwintering system translates to $19,880 in increased net return for a 100-cow dairy operation over a 140-d winter season. The net return was greater for the first year of study compared with the second and third year, and differences in profitability between years were driven by variation in feed costs and milk revenue. Economically, animals in colder climates may require about 10 to 30% more feed for the season compared with animals kept in a confinement freestall barn, so improvements in animal health and welfare from outwintering will need to exceed increased feed costs if outwintering is to be a profitable option.

There are several obvious benefits to out-wintering; building costs are lower, diseases associated with close confinement and poor ventilation are avoided, animals are generally cleaner, bedding costs could be reduced, feeding may be simplified, and herd size may be adjusted if weather conditions change quickly. There are five key messages to consider when considering outwintering, 1) provide adequate wind protection, 2) additional feed may be required for cows and heifers, 3) lactating cow teats should be dry before they leave the milking facility during cold weather, 4) health problems tend to be fewer than cows housed indoors or in confinement facilities, and 5) housing under the stars may not be for everyone.