Fueling Sustainable Energy and Agriculture: Putting Wind in a Bottle 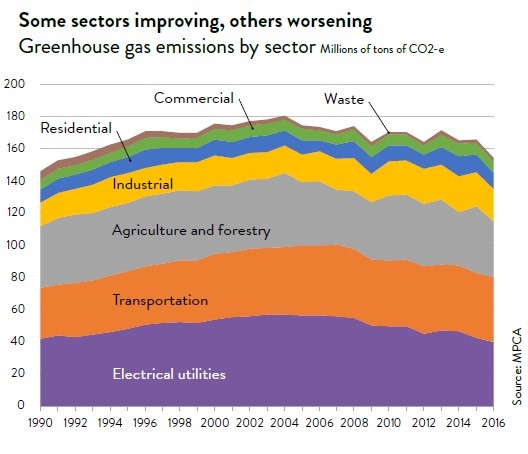 Even though progress has been made, the agriculture industry faces significant challenges in decarbonizing its energy. And, compared to the electric utility and transportation sectors, agricultural production does not have a clear road map forward. Clearly, transformative technology is required to achieve significant reductions.

Ten years ago, the renewable energy, crops, dairy, and swine programs at West Central Research and Outreach Center (WCROC), embarked on a goal to reduce fossil energy consumption in production agriculture. We call this effort the Greening of Agricultural Energy Initiative. The initiative began by measuring energy consumption across the WCROC research farm as well as on commercial livestock farms. Renewable and efficient energy technologies were then applied in innovative ways. Across our research farm, we generate wind energy from large- and small-scale wind turbines, produce electricity from multiple solar arrays, utilize solar thermal technologies to generate both space heating and cooling, transformed our dairy and swine facilities to better use renewables, and power autonomous weed control systems using solar PV. Perhaps the most transformative technology we are pursuing is using wind energy to power the production of anhydrous ammonia. In 2013, a pilot plant was built that uses electricity from a utility-scale wind turbine to produce hydrogen by electrolyzing water, nitrogen is separated from air, and then these gases are combined in a century-old chemical process named after it’s inventors - the Haber-Bosch Process. Why is this so important and transformative?

Corn production is the backbone of agriculture in Minnesota with over 7.9 million acres planted in 2018 (NASS, 2018). About 1/3 of the corn is used to produce 1.3 billion gallons of ethanol in Minnesota with the remainder primarily used for livestock feed. 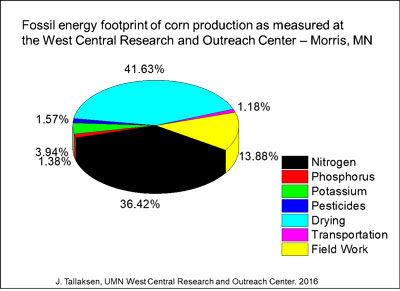 Tremendous amounts of energy are consumed in the production of corn. This pie graph represents the fossil energy footprint of corn production as measured at our research farm. Grain drying represents about 42% while tractor field work is at 14%. Some may be surprised, however, that nitrogen fertilizer makes up roughly 36% of the fossil energy footprint. This is due to the fact that natural gas is currently used in the production of anhydrous ammonia contributing over 1% to the total global greenhouse gas emissions.

So how can we as a State meet this challenge and transform agricultural energy? Referring back to the pie chart, over 90% of the fossil energy consumed in the production of corn can be displaced with low-carbon anhydrous ammonia produced using wind energy – nitrogen fertilizer production, grain drying, and tractor field work can all essentially be fueled with wind energy.

The University of Minnesota is a global leader in this field of research with the first wind-to-ammonia pilot plant in the world and patented technologies for efficient production and utilization of wind-produced ammonia. IN SIMPLE TERMS, WE ARE PUTTING WIND ENERGY IN A BOTTLE!

We envision a sustainable energy and agriculture system in which local production facilities use wind energy to produce ammonia. The ammonia is then used as fertilizer and fuel. Compared to other energy storage, ammonia is flexible and has many potential uses.  Local smart-grids and utilities can use ammonia to provide short- and long-term storage to backup intermittent wind and solar generation.  Farmers can produce wind-generated ammonia to significantly reduce the carbon footprint of their products.

Using wind production and energy load data from the nearby University of Minnesota, Morris campus (UMM) and the WCROC research farm, a case study (Palys, et al 2019) using ammonia as energy storage have indicated a low carbon credit cost of $17.60 / ton1. THIS IS TRANSFORMATIVE! In the ammonia-based sustainable energy and agriculture model, ammonia is used as both fertilizer and fuel on farms supply ammonia fuel to grain dryers and tractors. When wind and solar PV generation is unavailable at the WCROC and the UMM campus; ammonia is used for fueling internal engine generators and-/-or fuel cells to meet electric load requirements. The ammonia could also be used to fuel boilers that provide district heating and cooling for the campus. 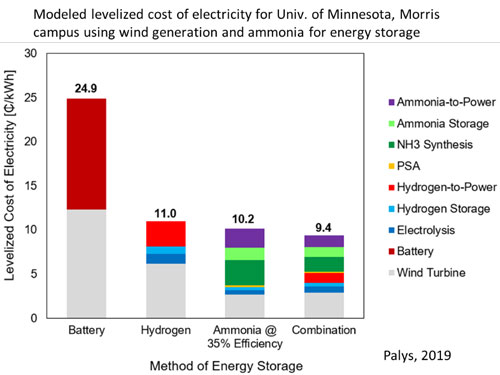 The US Department of Energy has indicated that storing wind energy as ammonia is less costly when compared to other technologies such as batteries and has an added benefit of providing longer-term, seasonal storage. A preliminary case study conducted by Palys, et al, modeling an energy storage system for the UMM campus agrees with this premise as shown in the graph below. Using a combination of wind energy and battery to meet 100% of the campus electric load projects to costs 24.9 cents / kWh while using a combination of wind with hydrogen and ammonia production with subsequent use as generator fuel has a cost project at 9.4 cents /kWh.

Beyond our local community and state, anhydrous ammonia is the basis of nitrogen fertilizer production across the world and is responsible for feeding HALF the global population2. The University of Minnesota is leading research to decarbonize nitrogen fertilizer production. Colleagues in the Department of Chemical Engineering and Materials Science as well as Bioproducts and Biosystems Engineering have developed more efficient, renewable ammonia production technologies – many of which have been patented.

Our research team is now partnering with collaborators across the nation and world to perhaps bring a large-scale demonstration project to Minnesota. With this on-going research, Minnesota is well on its way to decarbonize the energy consumed in production agriculture! We gratefully acknowledge the critical financial support our research teams have received especially from MnDRIVE, Minnesota Environment and Natural Resources Trust Fund, and the U.S. Department of Energy ARPA-E.

This article is based upon the following publication: Palys, M. J., Kuznetsov, A., Tallaksen, J., Reese, M., and Daoutidis, P.  A novel system for ammonia- based sustainable energy and agriculture: Concept and design optimization. Chemical Engineering and Processing-Process Intensification 140 (2019) 11–21.