Minnesota farmers and land managers are engaged in an annual battle to control weeds. Each year, significant amounts of herbicide, diesel fuel, labor, and money are expended to stay ahead of weed infestations. Control of weeds is critical in the production of food. Current methods of weed control using herbicides have been very effective, but may have unintentional and harmful consequences to our air, land, water, and wildlife resources. 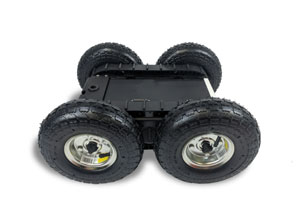 The WCROC is partnering with the College of Science and Engineering (CSE) to develop improved methods using robots to control weeds on agricultural lands. This effort is an extension of a current collaboration with CSE and Toro to develop an autonomous mower for cow pastures. The new project will focus on weed control in mid to late term row crops like corn and soybeans. The idea is to develop weeding implements that can be carried and operated on a small, robust autonomous vehicle down a single crop row. The robot will navigate through a field row by row identifying weeds and terminating them. The robot will be battery operated and will recharge via a solar powered trailer/battery bank parked near the field. 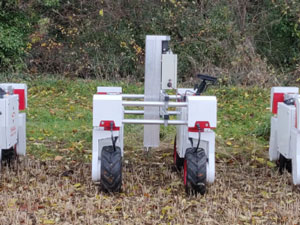 There are a lot of unique challenges to this project from navigating in a field and identifying weeds to targeting and removing weeds without damaging crops. A small commercial robot made by Rover Robotics has been purchased to test navigation sensors and programming as well as weed removal prototypes. It will be used in WCROC fields this summer to determine which ideas and methods work best. Initial weed removal prototypes will focus on mechanical weed removal so that it can be used in organic fields.

Once the best programming methods and weed removal prototypes have been selected they will be further tested next summer on a more capable vehicle like the SAGA Robotics Thorvald.

While the challenges to this project are great, the potential benefits are also great, including: