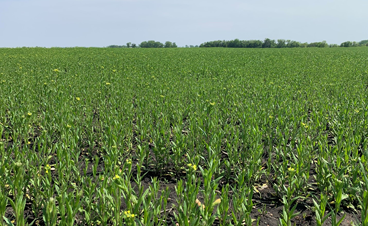 Farmers continually are adjusting their farming systems to adapt to changing market forces and societal pressures to improve the sustainability of food production. One such adjustment is the use of cover crops during winter. Winter cover crops prevent wind and water erosion of valuable topsoil during the long period from fall harvest until new crops can be established on the landscape in the next spring. Winter cover crops confer long-term benefits to the farmer by conserving topsoil but increase annual costs for seed, tillage, and planting of the cover crop. Crop farmers might be more willing to include winter cover crops in their farming system if they could recoup some of these short-term costs at the same time they are benefiting from the long-term conservation of topsoil. Winter camelina is one such cover crop that might be able to provide both short- and long-term benefits to farmers. Winter camelina is an oilseed crop that is planted in the fall and produces seed in the early summer. Seeds are crushed to extract camelina oil and the resulting meal, that is relatively high protein, could be used for livestock feed.

This past year at the West Central Research and Outreach Center, we evaluated the use of camelina meal in diets for growing-finishing pigs. Camelina meal is much higher in protein and the important amino acid, lysine, than corn or other cereal grains. However, it is lower in protein and lysine than soybean meal, the most common protein feedstuff for pigs. So, camelina meal fits in swine diets as a partial but not a complete replacement for soybean meal. Some varieties of camelina also contain anti-nutritional compounds that give it a bitter taste that might reduce feed intake of pigs. Knowing these characteristics of camelina, we studied diets that contained 0, 5, 10 or 15% camelina meal for pigs from about 75 lbs to 270 lbs body weight. Pigs were housed in an environmentally-controlled barn on totally slotted floors in pens of 8 pigs. We assigned 6 pens to each level of dietary camelina for a total of 192 pigs in the experiment. We evaluated growth performance of pigs, and quality of the carcasses produced from all pigs after they were harvested. In addition, we measured the eating quality of the pork produced from one pig in each pen.

Average daily weight gain of pigs was depressed by about 5% for pigs that consumed camelina meal in their diets (Figure 1). We observed a slight numerical reduction in feed intake when camelina meal was present in the diet but this difference was not statistically significant meaning that we do not have confidence that we will repeatedly observe this depression in feed intake. We expected a more severe reduction in feed intake but evidently the anti-nutritional factors were not present in high concentrations in the camelina meal we used. In contrast to growth performance, there was no meaningful difference in lean meat content of carcasses produced by pigs fed camelina meal compared to pigs that received no camelina (Figure 2). Likewise, we observed no effect of camelina meal on drip loss of loin chops, pH of loin, marbling score of chops or quality of pork bellies. These traits suggest that the eating quality of pork from pigs fed camelina meal will be similar to that from pigs fed corn-soybean meal diets. We are currently summarizing data collected from consumer taste panels to verify this perception.

In summary, it appears that camelina meal can be a useful replacement for soybean meal in diets for growing-finishing pigs when used at low levels (10% or less). Farmers need to evaluate the economics of using camelina meal in swine diets, and the anti-nutritional content of camelina meal and balance this against the value of soil conservation realized by planting winter camelina over the long term. 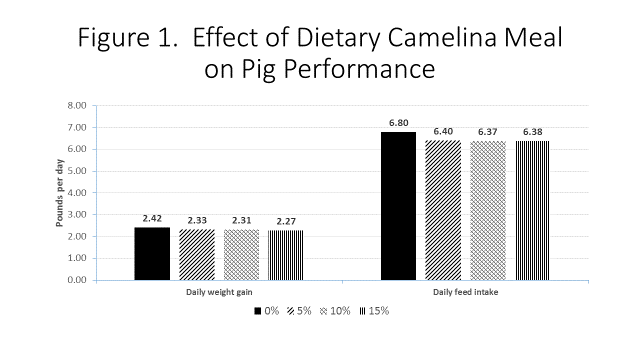 This project is supported by Organic Transition Program (Award# 2017-51106-27129) from the USDA National Institute of Food and Agriculture.