In the upper Midwest region, water is readily available for pigs and is supplied in a way that allows pigs to drink as much and as often as they choose.  Consequently, supply and quality of water is often overlooked by pig farmers and nutritionists.  The amount of water supplied to pigs has been the subject of some research in recent years but little attention has been paid to the quality of water supplied to pigs, especially nursery pigs.  A few years ago, pig farmers in Minnesota wondered if poor quality water might be the reason why they observed suboptimal performance and health of newly-weaned pigs in their nurseries.  In response to that question, we conducted a research study in the summer of 2019 to determine if three different water sources of varying quality might affect nursery pig performance and health.  For that study, we brought water from three different farms in Minnesota to our research swine nursery at WCROC and fed these waters to a group of 21-day old, newly-weaned pigs for the first 40 days after weaning.  Mineral composition and characteristics of all three waters varied greatly but were within published guidelines for acceptable water to be fed to pigs.  We expected that some measures of pig growth or health would be influenced by the quality of water they consumed.  However, our findings revealed absolutely no differences among water sources.

We were puzzled by this finding when considering that many pig farmers and industry professionals believe water quality has important effects on pig performance.  We wondered if the water delivery system might be influencing quality of water that reaches the pig and explain why pig farmers see negative effects of poor water quality on pigs.  In our 2019 study at WCROC, we installed new water lines to deliver water to pigs which eliminated any negative effects of water delivery system on water quality.  However, the original water distribution system in the WCROC nursery was still present.  That system was installed in the year 2000 when the barn was built and had not been cleaned since installation.  This provided us a unique opportunity to evaluate effects of water distribution system on pig performance and health.  In 2021, we repeated our 2019 experiment but this time we used water collected from the WCROC well.  We fed this water to pigs through the new water lines installed in 2019 which had been used only 6 weeks (NEW) or through the original water lines that had been used for over 20 years (OLD).

We compared the NEW and OLD water lines because we know that biofilms build up inside water lines over time.  Biofilms are slimy, sticky layers of bacteria  and have the potential to harbor organisms that might be harmful to pigs.  Additionally, biofilms could alter quality of water that reaches the pig.  For instance, good quality water coming into a pig barn might deteriorate in quality as it passes through water lines when biofilms are present.  Our recent experiment was designed to test if this phenomenon occurred in our WCROC nursery.  We did confirm presence of biofilm in the OLD but not the NEW water lines in our nursery.

After feeding pigs the same water for 42 days, we found that pigs consuming water through the NEW line consumed slightly less feed compared with pigs fed water through the OLD line (Figure 1).  This finding was opposite of what we expected.  However, this difference in feed intake had no effect on average daily gain of pigs when comparing OLD and NEW lines (Figure 2).  Similarly, we observed no differences in gain efficiency, number of pigs that exhibited poor health, or number of pigs that died when comparing the OLD and NEW lines. 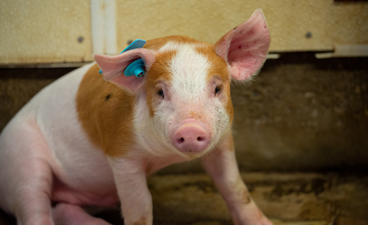 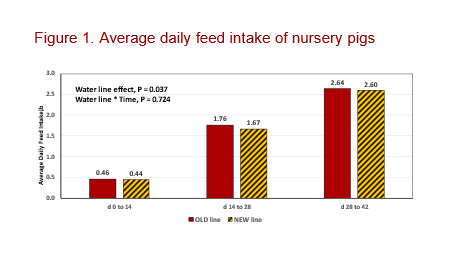 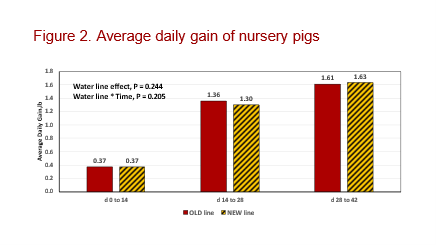