Understanding the microbiomes of pigs is a relatively new research area of intense interest to nutritionists, veterinarians, and animal health companies in the swine industry. The microbiome is defined by the Merriam-Webster dictionary as: “a community of microorganisms such as bacteria, fungi, and viruses that inhabit a particular environment”. Microbiomes exist in the pig’s body, primarily in the gut but also in other locations, on the pig’s body, and in the pig’s environment. We are learning that these microbiomes collectively influence the pig’s health, growth performance, and reproductive success. Microbiomes also influence the health and wellbeing of humans. Researchers studying swine microbiomes strive to understand what species of microorganisms are present, what functions those microorganisms perform, and how those functions influence health and performance of the pig. Many factors such as diet composition, use of antibiotics, presence of disease, and cleanliness of the environment, to name a few, can influence makeup and function of the microbiome. The Holy Grail of swine microbiome research is understanding how to use these factors to influence the pig’s microbiome such that pig performance and health are optimized.

Like humans, piglets are born with little or no microbiome as they enter the world from a relatively sterile womb of their mother, the sow. The newborn piglet’s microbiome is established rather soon after birth when the piglet is “seeded” with microorganisms it encounters in the birth process, in the barn environment, and from the sow’s vaginal canal, feces, udder, mouth, and skin. Understanding the factors that affect establishment of the newborn piglet’s microbiome will help us determine how to influence the seeding process in a way that will potentially improve health and performance of pigs throughout their life.

At the West Central Research and Outreach Center, we hosted a small pilot study led by researchers in the Department of Animal Science (Law and Gomez) designed to determine how cleanliness of the farrowing (birthing) environment influences establishment of the piglet’s microbiome. For this experiment, we washed two farrowing rooms with a high-pressure, hot water washer to remove organic matter left from the last group of pigs in the rooms. After washing, we sprayed disinfectant on all the surfaces that sows and piglets would encounter in one room but left the other room untouched. High-pressure, hot water washing plus disinfection of farrowing rooms is a routine practice that is used throughout the commercial swine industry.  Pregnant sows were moved into both rooms about 7 days before their expected farrowing dates. Before farrowing, samples were collected from sows (rectal, vaginal, oral, udder) and the barn surfaces (floors, feeders, drinkers) they encountered in both rooms to determine composition of the microbiomes present. At and shortly after birth of the piglets, samples were collected from sows once again and from piglets (fecal, nasal). Piglet samples were also collected throughout the nursing period until weaning at 21 days of age.

The greater microbiome diversity and different microbiome communities of piglets from the washed only room may make them more robust to disease and other stresses they encounter later in life which would be a long term benefit. However, the reduced weaning weight compared with pigs from the disinfected room likely will have immediate negative effects on pig performance. So, what are the next steps? First, we need to expand this study with more pigs to verify the effects of farrowing room disinfection on piglet microbiomes. Second, we need to follow pigs after weaning to determine if a more diverse microbiome established by skipping disinfection in farrowing rooms is beneficial to pigs later in life. At this point, we recommend pig farmers continue to wash and disinfect farrowing rooms as is current practice until we generate more definitive data that warrants re-evaluation of current practices. 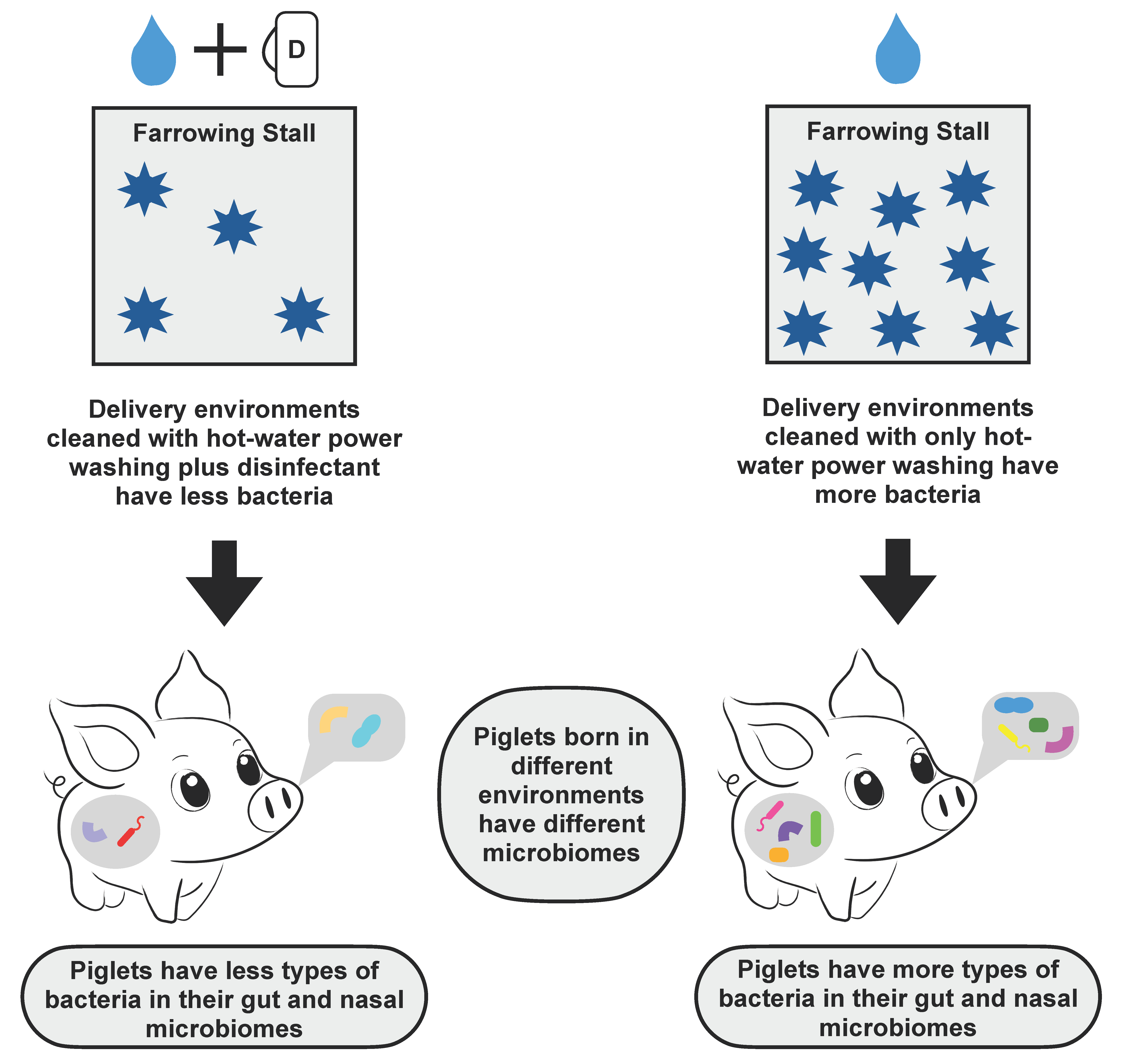