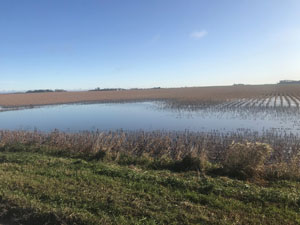 Any industry that works outside has been impacted by the amount of rainfall in 2019. In addition to a wet spring, we also had to contend with a wet fall for the third year in a row.

The year 1984 was similar to 2019 in precipitation amounts, but the distribution was different. Below is the 1984 weather summary written by Sam Evans, former staff at the West Central Research and Outreach Center (WCROC).

Precipitation that occurs in the winter when the ground is frozen usually does not add much water to the soil.  If we look at May through October 2019, this year is the wettest on record (28.44 inches) with 1984 second with .97 inches less. The fall of 2018 was also wet and was a setup for this year’s wet spring with record preventive plant acres. Currently, we are 2.07 inches above 2018.

In 1984, Sam reported 9.21 inches of rain in October which prevented harvest until freeze up. That is most likely what will happen this year. During the 2019 growing season, we had even a more even distribution of precipitation than in 1984. The table below lists the precipitation from last three years as well as from 1984. The spring of 2019 started out with saturated soils and, except for April, we had above average precipitation for each month. This allowed the soils to become saturated or near saturated for the entire summer making field work including harvesting forages, harvesting small grain and cultivating, very challenging.

Another factor that may have an effect on soil moisture is changes in evaporation. We measure evaporation with the evaporation pan, which is a four-foot diameter round pan we measure the water depth in on a weekly basis. In 1984, roughly 35 inches of water would evaporate from May to September. By comparison, in the last few years we are seeing evaporation levels in the low twenties. This year, we measured 21.2 inches of evaporation, yet we received 25.42 inches of rain. Hopefully we will have a good stretch of dry days.